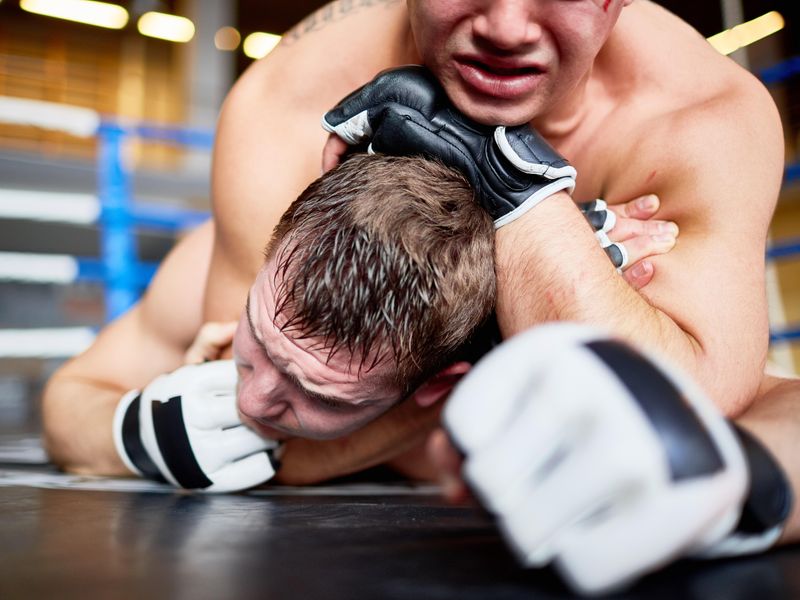 In Boxers and MMA Fighters, Brain May Make Some Recovery After Retirement

Professional fighters take a lot of knocks to the head, but a new study suggests they may find themselves thinking more clearly again after they retire.

Many studies have pointed to the perils of repeated blows to the head in sports like boxing and football. Repetitive head impacts, as researchers call them, can damage the brain and eventually cause problems ranging from dimmed memory and concentration to chronic traumatic encephalopathy (CTE).

CTE is an incurable, progressive form of brain degeneration that can cause memory loss, confusion, and mood and behavioral problems like depression, anxiety and aggression. It was first described a century ago in boxers, when it was dubbed "punch drunk syndrome."

These days, it's recognized that athletes, military veterans and others exposed to repetitive head impacts can suffer CTE or other lasting brain damage.

Little has been known, however, about the typical trajectory of professional athletes' brain health once they retire.

Now, the new study offers some good news: Researchers found that professional fighters who retired by their early 30s showed, on average, an improvement in their memory and thinking skills over the next two years. These former fighters also showed a stabilization in measures of brain tissue thickness -- while their peers who remained in the sport showed a subtle brain tissue thinning.

The findings suggest there is a point from which the brain can recover from fighting-inflicted injury, said researcher Dr. Aaron Ritter, of the Cleveland Clinic Lou Ruvo Center for Brain Health in Las Vegas.

"This isn't the whole story," he said of the research. "But it's a good story."

The findings, published Sept. 14 in the journal Neurology, are based on 90 professional boxers and mixed martial arts fighters. All were part of a larger Cleveland Clinic study of brain health among professional fighters, begun in 2011.

The group included 45 fighters who were still active when they entered the study but retired not long after -- by the time they were in their early 30s. Ritter's team compared them against 45 fighters the same age and with similar demographics, but who remained active.

All 90 fighters underwent tests of their memory and thinking skills, along with MRI brain scans at the outset, when all were active. They had repeat evaluations around three years later. At that point, the retired group had been out of fighting for at least two years.

On average, Ritter's team found, retired fighters showed improvements in their mental sharpness, whereas the active group declined. And on MRI scans, active fighters showed a continued thinning in various areas of brain tissue, while the retired group showed stabilization.

It's not clear why the retired fighters improved on their test scores. But Ritter suspects a reduction in inflammation in the brain might be key.

A subgroup of the fighters underwent blood tests that measure neurofilament light (NfL), a protein that is part of the nerve fibers that brain cells use to transmit signals. High levels of NfL in the blood indicate damage to those nerve fibers.

Overall, the researchers found, retired fighters had a decline in their NfL blood levels, while active fighters showed no change.

Steven Broglio is director of the University of Michigan Concussion Center and was not part of the study. He said it's clear that some athletes exposed to repeated head impacts do suffer long-term problems as a result.

But, he said, "it's probably a matter of dose-effect."

The brain is "plastic," or malleable, Broglio said, and it's capable of recovery -- at least up to a certain dose of repeat head impacts.

There is, however, no clear threshold: According to Broglio, individual athletes will vary in what head-impact dose they can tolerate without lasting consequences.

But on the whole, Broglio said, the new findings offer reassurance and may also be relevant to other pro sports, like football, where athletes get repetitive knocks to the head.

Both he and Ritter also noted that, thanks to brain injury awareness, today's contact sports are different from what they were years ago. Helmets and other protective gear are better, and rules and officiating have changed.

No one is saying athletes shouldn't worry about knocks to the head. Both experts said they should follow safety precautions to limit their exposure, and if they do suffer a concussion, follow medical advice on when it's safe to return to play.

In addition, Ritter said, anyone with lingering symptoms after a concussion should tell their doctor.

The U.S. Centers for Disease Control and Prevention has more on sports-related head injuries.