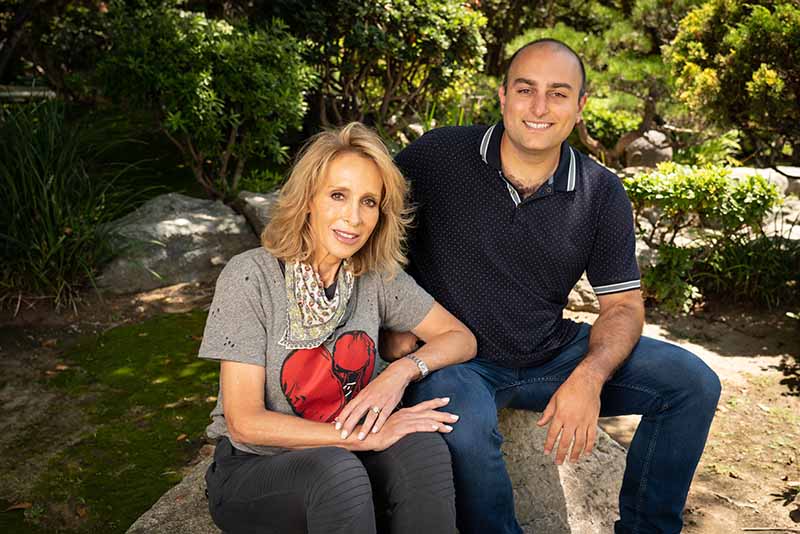 Families bond over lots of shared experiences -- but one Leslie Seigel and her adult son, Josh, never expected to share was battling cancer.

Soon after Leslie finished chemotherapy for an aggressive form of breast cancer, however, Josh found himself waging his own battle with testicular cancer.

The mother and son soon learned they shared something else -- a genetic mutation called BRCA1 that increases the risk of breast, ovarian and pancreatic cancers in women, as well as prostate, pancreatic and possibly other types of cancer in men.

Leslie, 60, said coping with Josh's diagnosis was harder for her than her own cancer.

"If I could've taken the hit for him, I would have," she said.

Leslie, an entrepreneur and businesswoman in Newport Beach, Calif., was no stranger to the world of cancer, even before she was diagnosed with breast cancer for the first time in the late 1980s. Her mother had died of breast cancer at age 49; Leslie was 21 at the time.

Leslie was 29 and had just given birth to her daughter, Ashley, (who is now 29 herself and exploring preventive measures including a double mastectomy and freezing her eggs) when she felt a lump in her breast.

"I mentioned it to my doctors and was ignored," she recalled. "They said, 'You're too young to have breast cancer,' but because of my mother's history, I insisted. When I had a biopsy, they learned my cancer was stage 2. I had chemo, radiation and a lumpectomy."

At the time, Leslie's doctors suggested that she look into a prophylactic double mastectomy to reduce the odds of developing a BRCA1 cancer. But she didn't know where to go, and she was raising two small children. So she didn't have the additional surgery.

Then, when she was 57, Leslie underwent preventive screening for high-risk patients, which included a mammogram and a three-dimensional ultrasound. The mammogram came back normal, but the ultrasound found the small, stage 1 tumor.

But this new cancer was a very aggressive type, related to BRCA1, called triple negative breast cancer. Even though it was caught early, Leslie needed an aggressive chemo regimen and a double mastectomy to prevent new breast cancers from developing.

Leslie's doctor, Dr. James Waisman, a medical oncologist at City of Hope Hospital in Duarte, Calif., said he's very optimistic about Leslie's future, and added that there is a high probability that her cancer has been cured.

To celebrate her good health, Leslie and her family participated in a City of Hope fundraising walk in the fall of 2019.

Just a month later, however, Josh, 31, was diagnosed with testicular cancer.

"There's no clear consensus on whether my cancer is related to BRCA1 -- some doctors say it is, some say it isn't," said Josh, of Marina del Rey, Calif. "But if you have the BRCA gene, you're more likely to get cancer in general."

Josh's initial experience was similar to what his mother's had been in the 1980s. The first doctors he saw said he had an infection and sent him home with antibiotics. Pain isn't typically a symptom of testicular cancer, so no one suspected it.

Once Josh received a diagnosis, he decided to get a second opinion where his mother had been successfully treated. He had surgery and finished two rounds of chemotherapy just before the COVID-19 pandemic hit.

"Testicular cancer is one of the most curable forms of cancer that exists," Josh said. "Treatment wasn't easy, but I never felt in fear for my life."

It was helpful, he added, that his mother had already been through treatment. He had already met many of the nurses during Leslie's cancer treatment, and his mom was able to offer firsthand advice to make the experience easier.

Waisman didn't treat Josh, but is familiar with his case and said he also has a "very high probability of being cured."

Josh said knowing what the plan was helped him get through his treatment. Leslie agreed, and added that support is a "big deal."

Leslie said Josh's fiance (now wife) was extremely supportive. She said it's also key to have a full health care team to support you.

She also noted that while family and friends can be a great support, it's important for everyone to think carefully about the things they say.

"People would say to me about Josh's cancer, 'That's the easiest cancer,'" Leslie recalled. "I realize that no one is intentionally trying to say the wrong thing, but it's still my son, and it's still cancer."

In March, Josh got to ring the same gong his mother rang to signify the end of chemotherapy. Their cancer journey isn't over yet, though: In October, they'll serve as ambassadors to help raise money for the City of Hope's 2020 National Virtual Walk for Hope.

Read more about testing for BRCA genes from the American Cancer Society.