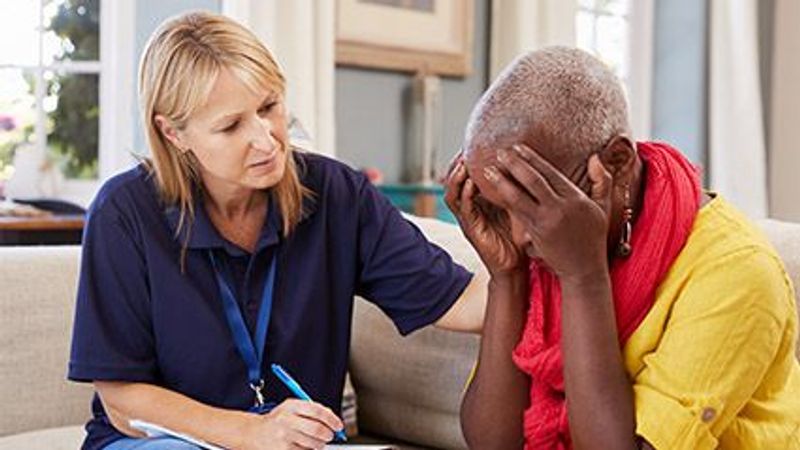 Older adults with memory problems may progress to Alzheimer's more quickly if they are also suffering from anxiety symptoms, a preliminary study suggests.

It's common for people with Alzheimer's disease to have mood symptoms, including anxiety and depression. And some research has suggested those symptoms can, in older people, act as early indicators of the dementia process.

The new study focused on 339 patients diagnosed with mild cognitive impairment -- persistent problems with memory and thinking skills that can progress to full-blown dementia.

But progression is not guaranteed, and people vary in how quickly their mental functioning declines.

There's no way to predict how things will go for any one person, said Dr. Maria Vittoria Spampinato, senior author on the study.

But researchers are trying to figure out whether certain factors are linked to the speed of progression. The new findings suggest anxiety might be one, according to Spampinato, a professor of radiology at the Medical University of South Carolina.

Her team found that patients with more anxiety symptoms at the outset were more likely to be diagnosed with Alzheimer's disease over the next several years, compared to those with few symptoms.

Does that mean anxiety speeds up the dementia process? Not necessarily, according to Mary Sano, director of the Alzheimer's Disease Research Center at Mount Sinai in New York City.

Instead, anxiety is likely another symptom of the underlying brain disease, said Sano, who was not involved in the study.

She doubted that treating anxiety in someone with mild cognitive impairment would "change the underlying biology" of the dementia process.

Still, Sano said, recognizing anxiety in those patients is still important. For one, it might serve as a red flag that someone is at risk of more rapid decline.

That's key, Sano said, partly because anxiety symptoms are easy to measure. In this study, some other factors were linked to faster progression -- including shrinkage in certain brain areas. But that can only be gauged with a brain MRI.

Plus, Sano said, helping people cope with anxiety should be a goal in its own right. "It's an important symptom to consider," she said.

The findings are based on a study of North American patients with mild cognitive impairment that involved memory problems. At the outset, all underwent anxiety and depression screening, MRI brain scans and blood tests.

Of 339 patients, 72 progressed to Alzheimer's over the next several years. Those with higher anxiety levels at the start tended to have a quicker progression -- as did patients with lower tissue volume in two brain areas involved in memory and learning.

Genes mattered, too: People carrying a gene variant linked to higher Alzheimer's risk -- ApoE4 -- also had a faster decline, compared to those with different variants.

Even with those other factors taken into account, though, anxiety was independently linked to a speedier progression, Spampinato said.

That alone, however, does not mean anxiety directly worsens cognitive problems.

"People living with mild cognitive impairment may experience anxiety, but what's unclear at this point is whether controlling or reducing anxiety may slow cognitive decline," said Heather Snyder, vice president of medical and scientific operations at the Alzheimer's Association.

She agreed with Sano on the importance of recognizing anxiety regardless.

"For individuals living with mild cognitive impairment or dementia," Snyder said, "managing anxiety and stress is an important aspect of providing care."

The Alzheimer's Association recommends some steps for patients and families: Simplify daily routines, make the home environment calm, and regularly fit in pleasant activities -- such as taking walks, gardening and listening to music.

Talking to a health care provider is always an option, too, Sano said.

"Sometimes older folks can be hesitant to talk about anxiety and depression," she noted. "But I think that's a mistake."

The study is scheduled to be presented Monday at the Radiological Society of North America's annual meeting, being held online. Findings reported at meetings are generally considered preliminary until they are published in a peer-reviewed journal.

The Alzheimer's Association has more on anxiety and agitation.